I've been slowly reading all the old COMPUTE!'s Gazette Commodore 64 magazines on my iPad Pro with its magazine-sized display. Magazines like CG were a great source of news and budget software, with each issue offering a number of type-in utilities and games.

The adventure game Vampyre Hunter caught my eye in Issue 35 (May 1986). I like adventure games and I love vampire and zombie-type scenarios so I decided to try it out. Here's the companion article from the magazine.

And then there are 29 columns of program to type in at the back of the magazine. That's HUUUUUUGE! Even Crossroads, literally the best type-in game ever, was only 9 columns!

Typing in a game a quarter of this size usually took hours when I was younger. I'm sure I'd be a lot faster now but I'd rather not put it to the test. Luckily all the type-in games were also distributed on a monthly companion disk for just $70 a year. Unluckily I never had a disk subscription because we didn't have that kind of money, which is $178 in 2022 dollars (wow!). Luckily archive.org also has a copy of all the companion disks so I downloaded 1986-05.d64 and gave Vampyre Hunter a go on VirtualC64!

Here are a few minutes of text adventure gameplay from the beginning of the game.

The map is, in fact, huge. I hardly ever bothered with mapping anything back in the day, but I decided to this time 'cause I have a nice, easy flowchart tool called Diagrams. It still ended up taking way more time than I anticipated! The map is below; you start in the yellow area at the bottom.

I have now spent quite a few hours over the last two days playing, exploring, mapping, and ultimately finishing Vampyre Hunter. I had a lot of fun, but the executive summary is that the game is too large, too ambitious, and it doesn't deliver on its implicit promises:

Of all the items you find in the game, only a few of them matter. All you really need is food and a wooden stake; then find your way into the castle, spend an hour looking for the coffin, and stake the vamp.

Ironically, wooden stakes are the one item you won't find laying around in the game. They have to be crafted, which is a nice touch. It becomes fairly evident what needs to happen, but you end up fighting the parser to actually do it. "chop wood with axe"? No. "use axe on wood"? No. "use knife on wood"? No. No. No. No. No. Turns out the command is "make stakes". Just make sure you have all the items you need and:

Here's the end of the game.

Like I said I had fun playing it. Even though the initial enchantment ultimately gave way to disillusion, I regret nothing. It is a fine magazine game but more than that, I am now totally inspired to make a vampire hunting game that delivers on the unfulfilled potential of Vampyre Hunter!

I started rewriting my Rogue [https://github.com/AbePralle/Rogue] language compiler from scratch. Rogue is evolved from a series of earlier languages, so this is approximately the sixth full iteration of that compiler, with each version programmed using the compiler from the previous iteration. Rogue v2 is being programmed

I'm writing a new interpreted language called Boss. It has Roguelike syntax and in fact the general idea is for it to be a version of Rogue [https://github.com/AbePralle/Rogue] that doesn't require a C++ compiler or development environment. As I go I'm writing increasingly sophisticated toy programs 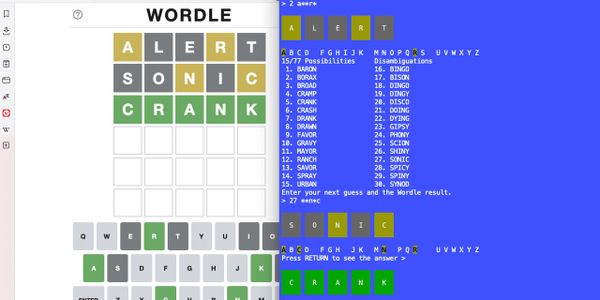 I've just released Wordle Buddy, a solver for the popular Wordle [https://powerlanguage.co.uk/wordle/] puzzle game, as a console app for macOS, Windows, and Linux. It also includes a local game mode (no need to wait for a full day!), with or without the solver, and it has